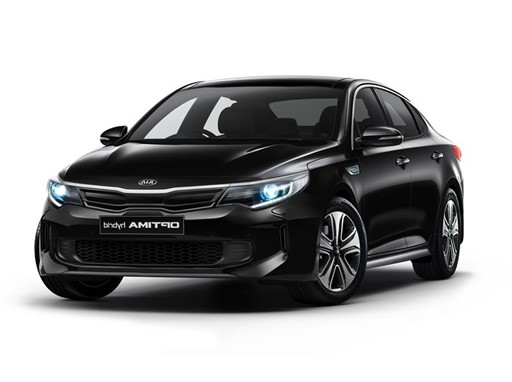 Kia Motors today unveiled the all-new 2017 Optima Plug-in Hybrid (PHEV) at the Chicago Auto Show. Kia's first PHEV joined two other fuel-efficient additions to the brand's growing line-up of eco-friendly vehicles, including the all-new 2017 Niro Hybrid Utility Vehicle (HUV) and all-new 2017 Optima Hybrid (HEV), all three of which are being introduced under the Kia Motors EcoDynamics environmentally friendly sub-brand. A host of new technologies and features in the Kia Optima PHEV, including a more powerful hybrid engine, a smarter and more robust telematics system, exterior design enhancements, and greater interior refinement, all combine to deliver a superior hybrid drive experience.

"As part of our bold initiative to increase fuel efficiency by 25 percent across the entire Kia model line-up by 2020, a plug-in hybrid was a critical addition to our offering. The Optima HEV adds hybrid efficiency to the standout styling and vehicle dynamics of our all-new Optima, and the PHEV takes things one step further with all-electric range that is among the best in the segment," said Orth Hedrick, vice president, product planning, Kia Motors America (KMA). "All three of the vehicles being introduced here at the Chicago Auto Show are emblematic of Kia's commitment to sustainability and our philosophy that you shouldn't have to accept compromises when making a green choice."

The all-new 2017 Optima Plug-in Hybrid is crafted with many of the same luxurious appointments of its gas-powered sibling, along with numerous Hybrid-exclusive touches, including a distinctive instrument cluster and unique exterior design elements and specially designed alloy wheels. The Optima Plug-in Hybrid, available in one trim, EX, will be built at Hwasung, South Korea, and is expected to go on sale in the fourth quarter of this year. Pricing will be announced closer to the on-sale date.

With an estimated 600 miles of total driving range, the Optima PHEV's next-generation battery system features a 9.8 kWh lithium-ion polymer battery pack, which produces roughly 60 percent more energy output than the battery pack found in the outgoing Optima's hybrid system, and is estimated to achieve 27 miles in full EV mode, placing the Optima PHEV among the segment leaders in all-electric range. To increase available cargo capacity in the trunk, the new battery pack is hidden behind the rear seat and tire well, giving Optima PHEV one of the largest cargo areas among all midsize PHEVs. Additional power to the battery system is generated from the vehicle's improved Regenerative Braking System, which maximizes regenerative torque through refined cooperative control between the hybrid control unit and the brake actuation unit, resulting in a 10 percent increase in regenerative energy. The Optima PHEV is equipped with a single charging port conveniently located in the driver's side front fender. A full charge can be achieved in less-than three hours via a 240V (Level 2) charger, and less-than nine hours via a 120V (Level 1) charger.

The all-new Optima PHEV provides its driver with options to reserve electric range via a plug-in hybrid mode select system. Exclusive to the PHEV variant of the all-new Optima, the system includes an all-Electric Mode (EV), which is suitable for short-range city driving, Hybrid Mode (HEV) for highway driving, and Charging Mode, which increases energy direction to the battery while driving at higher speeds. The energy produced while in Charging Mode can then be utilized in EV mode, extending the convenience of full electric power without stopping to charge.

All-new Eco-DAS (Driver Assistance System) features Kia's first application of Coasting Guide. This feature aims at maximizing fuel economy by essentially coaching the driver on when to coast and brake via an icon in the Instrument Panel that blinks for four-seconds and sounds a one-time audible alert.

Aerodynamic form and function
Although the new PHEV boasts the same bold styling as the redesigned Optima, it offers distinctive design features and exterior elements that differentiate it from the gas-powered models in the Optima range, while also achieving the segment's lowest coefficient of drag, tied with the Tesla Model S at 0.24 Cd. Featuring an active grille, which automatically opens and closes at high and low speeds, the PHEV improve aerodynamics while optimizing engine bay cooling. Numerous other styling differences include a model-specific front air curtain, a beveled rear bumper, a rear diffuser designed to streamline airflow by shrouding the exhaust tip, and an aerodynamic alloy-wheel design. These are complemented by modern LED lighting, chrome side sill molding, and 'Eco Plug-In' badging. Similar to the gasoline-powered Optima, the PHEV's wheelbase has been lengthened by 0.4 inches (now 110 inches) over the previous generation Optima, and overall length has increased 0.4 inches to 191.1 inches.

The Optima Plug-In Hybrid has the richest set of UVO telematics in any vehicle Kia has ever produced. With more than 30 features, the PHEV encompasses technology from Kia's flagship telematics vehicles, the K900 luxury sedan and Soul EV, and adds Android Auto™ and Apple CarPlay. UVO EV Services includes LTE wireless connectivity that enables direct communication to the vehicle for features such as remote start/stop, remote preconditioning of cabin temperature, and remote lock/unlock via the UVO app . Included in the app is a full suite of My Car Zone features, which includes curfew and speed alerts and Geofence settings, as well as Local Search powered by Google® , which allows users to easily search for POIs (Points of Interest).

Exclusive EV features for charging convenience include the ability to locate charging stations, an option to check your vehicle's charge status, as well as scheduling charge events. Adding hands-free connectivity is Google® Voice Recognition Local Search, which can search for POIs utilizing voice recognition technology. Additionally, within the Kia App Store, apps can be downloaded to the head-unit using the PHEV's Wi-Fi capability.

Available at no cost for the first three years of ownership with no subscription necessary, UVO EV Services utilizes an embedded connectivity solution powered by the Verizon® network and the UVO smartphone app to provide Optima Plug-In Hybrid owners with an innovative, real-time, in-vehicle connectivity experience.

Drivers are treated to an outstanding audio experience with the available Harman/Kardon QuantumLogic™ Premium Surround Sound Audio System , which includes 10 speakers, Clari-Fi™ technology and an upgraded 630-watt digital amplifier. Introduced in the 2016 Sorento, Clari-Fi is a patented music restoration technology that rebuilds audio signals that are lost in the digital compression process.

Editor's note: All technical specifications and standard/optional features in this press release refer to the U.S. model and may differ from models marketed in other regions.