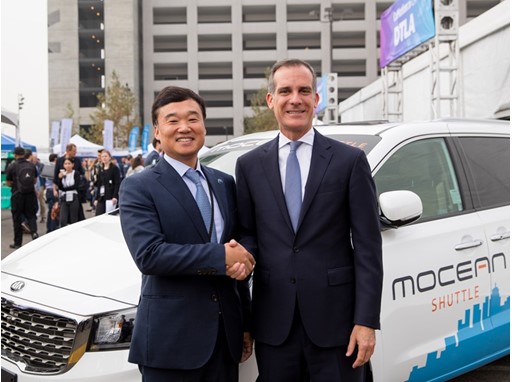 Hyundai Motor Group today established MoceanLab, a mobility service venture, as part of the Group’s larger initiative to create a sustainable, connected future.
MoceanLab will provide mobility services in the City of Los Angeles, and expand its services to autonomous ridesharing, shuttling, multimodal transportation, and personal mobility.
After a comprehensive thorough review, Hyundai Motor Group identified Los Angeles as the city to launch the MoceanLab. The opportunities posed by LA’s large and diverse population, challenges with traffic congestion, and demonstrated commitments to transportation innovation and sustainability, including LA Mayor Eric Garcetti’s initiatives and leadership, made it the ideal city for MoceanLab. Hyundai Motor Group plans to explore and integrate new mobility innovations – such as micromobility and multimodal transportation – and ensure the effectiveness and growth of mobility services throughout LA.

Mocean Carshare, a pilot program from MoceanLab, will be a part of the City of Los Angeles’ carsharing permit pilot program offered by the Los Angeles Department of Transportation (LADOT) and Los Angeles County Metropolitan Transportation Authority (LA METRO). The Group will utilize up to 20 Hyundai IONIQ Plug-in Hybrid Electric vehicles for the pilot program, set to start at the end of 2019. The goal is to transition the fleet to fully electric vehicles with a gradual expansion of a combined 300 vehicles of Hyundai Motor Company and Kia Motors Corporation.
MoceanLab will further expand beyond the initial carsharing pilot program. In anticipation of the 2028 Los Angeles Olympics, MoceanLab aims to alleviate traffic and increase convenience. Ultimately connecting customers to mass transit options and reduce traffic congestion around the city. This includes services offering autonomous ridesharing, shuttling, multimodal transportation, and personal mobility.
MoceanLab displayed its carsharing and shuttle technology at the 2019 CoMotion LA event. CoMotion LA has given the world a glimpse of the new urban future, presented by leading technologists, transport operators, government officials and venture capitalists since 2017. The event was attended by over 2000 major government and industry officials including Mayor Eric Garcetti, and Nina Hachigian, Deputy Mayor of International Affairs of LA.
Hyundai Motor Group is continuing its developments in mobility services through active establishments of joint ventures and partnerships. In September, the Group formed a joint venture with Aptiv, focused on the efficient development of driverless systems using world-leading autonomous technology. Hyundai this month also began testing BotRide, a fleet of self-driving KONA Electric SUVs in Irvine, California in collaboration with Pony.ai and Via.