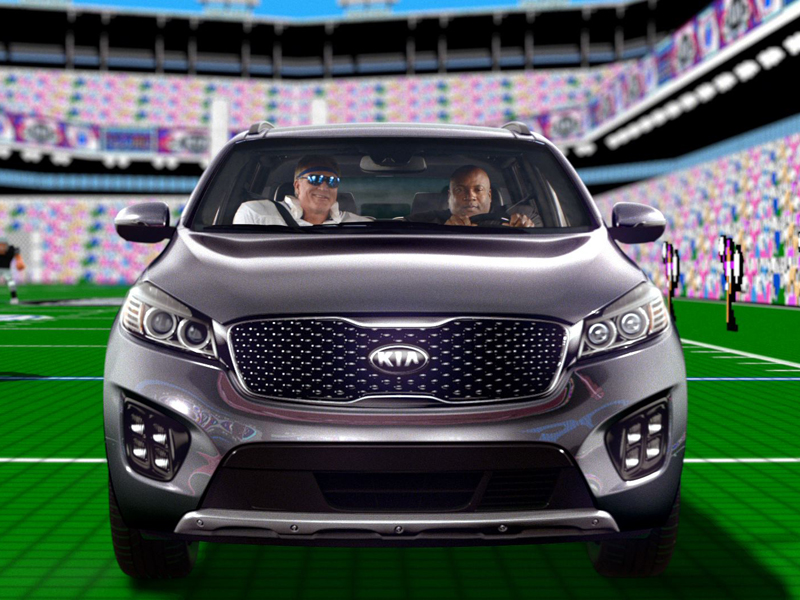 Bo and The Boz Face Off Once Again as Kia’s Largest and Most Capable Utility Vehicle
Uses Power and Agility to Safely Zig and Zag Up and Down the Field
IRVINE, Calif., September 8, 2016 – Football is back! And nearly 30 years after crossing paths in Seattle, football legends Bo Jackson and Brian Bosworth find themselves once again on a collision course – but this time with a very different result – in a new advertising campaign debuting online today for Kia Motors’ award-winning Sorento. When the “MVP of SUV’s” effort makes its broadcast debut this Sunday, it will mark Kia’s third consecutive season with NBC’s “Sunday Night Football,” and offer a new twist on Tecmo Bowl, still considered one of the best sports video games ever nearly three decades after its release.
Blending live action footage with Tecmo Bowl’s signature 8-bit graphics and sound effects, the two spots – “Tecmo Bros” and “Tecmo Bo” – place the Sorento in the center of the action; and with unstoppable running back Bo Jackson behind the wheel, the advanced technology and driver assistance features of the “MVP of SUV’s” allows him to dominate once more, with only Brian Bosworth standing between him and the goal line in “Tecmo Bros.”
“At Kia, we are always looking to stand out, and using the Sorento to take football fans inside a beloved video game and bring two legendary players roaring back in all their 8-bit glory was an opportunity that was simply too good to pass up,” said Michael Sprague, chief operating officer and EVP, Kia Motors America (KMA). “Sunday Night Football has been the top-rated primetime show for five straight years, and after our football-themed advertising helped push Sorento sales up more than 13 percent in 2015, returning this year was a no-brainer.”
Created by David&Goliath, KMA’s advertising agency of record, the “MVP of SUV’s” campaign showcases the 2017 Sorento’s extensive list of standard and available driver assistance and infotainment features, including: Forward Collision Warning and Autonomous Emergency Braking; an intelligent and fully active all-wheel drive system; and the latest generation of Kia’s voice-activated UVO infotainment and telematics system featuring Android AutoTM and Apple® CarPlay which can be paired with a 630-watt, 12-speaker Infinity® premium audio system that uses Clari-FiTM4 technology to rebuild audio details lost in digitally compressed music.
“Football fans remember these legendary players, and paired with the ever-lasting popularity of Tecmo Bowl, we believed these were the perfect channels to communicate the power, intelligence and nimble handling of the Sorento,” said Colin Jeffery, chief creative officer, David&Goliath. “The play on technology in terms of blending the old video game graphics with the new advancements in the Sorento illustrates just how far Kia has come and how advanced this SUV truly is.”