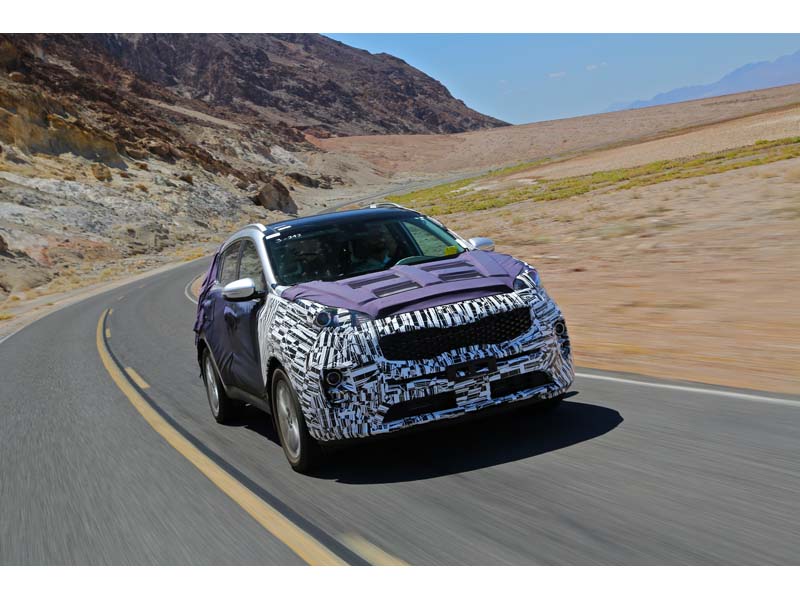 (SEOUL) September 17, 2015 – Kia Motors has today revealed details of the intensive hot weather development tests for the all-new Kia Sportage – as part of the most extreme and rigorous vehicle testing programme ever devised by the company.

The all-new Sportage made its global debut at the 2015 Frankfurt International Motor Show earlier this month, and will go on sale globally in the first quarter of 2016.

Now entering its fourth-generation, Kia's all-new compact SUV is undergoing the final stages of its development, with engineers testing the Sportage in Death Valley – one of the hottest places on Earth, with temperatures rising as high as 56ºC (132ºF) in the summer months.

This stage of testing means Kia can develop cars designed to operate in the harshest environments. For the all-new Sportage's hot weather test, particular focus has been placed on developing its class-leading heating, ventilation and air conditioning (HVAC) systems.

Kia turns the heat up for class-leading air conditioning performance
Among the various individual hot weather testing methods, three gruelling tests are often employed by Kia's vehicle test engineers, placing huge demand on the HVAC systems and the effects they have on engine and transmission cooling when used in the extreme heat.

The first of these tests is the up-hill climb, in which the vehicle is soaked in the midday sun for an hour to bring the cabin temperature over 50ºC (122ºF). The Sportage is then driven from sea level to almost 5,000 feet elevation through the aptly-named Furnace Creek area of Death Valley, a steady climb over 27 kilometres (17 miles) at 100 kph (62 mph). The test is designed to ensure that the additional load placed on the engine has minimum impact on the car's ability to cool itself and its occupants.

The second test, the stop-and-go drive, simulates typical conditions in a congested urban centre. Engineers drive the all-new Sportage at 40 kph (25 mph) for two minutes through Furnace Creek, before stopping and idling for another two minutes. The process is repeated several times, and – again – is designed to put additional strain on the engine, transmission and HVAC systems and eliminate any possible flaws.

The final test devised by Kia's engineering teams for the all-new Sportage is a slow drive, which takes place at the lowest point in North America, Badwater Basin – around 86 metres (282 feet) below sea level. After another one-hour heat soak, the all-new Sportage is driven at 40 kph (25 mph) for 30 minutes at a time, allowing vehicle engineers to verify – and improve – the capacity of the HVAC system when there is a dramatically reduced level of airflow to the air conditioning condenser unit.

Mojave Desert: Kia's California proving ground
In addition to the demands placed on the car by the extreme conditions of Death Valley, Kia also carries out a series of hot weather tests at the company's own North American testing facility – the Mojave Proving Ground. Located deep within the Californian Mojave Desert, the Proving Ground demonstrates the lengths to which Kia goes to ensure the quality and durability of every new car it creates, including the all-new Sportage.

Established in 2004, the Mojave Proving Ground is around 177 kilometres (110 miles) from Los Angeles. The 17.4 km2 (6.7 square miles) center carries out extensive on- and off-road testing across numerous types of surface, and – in this notably hot, dry part of the world – the facility also enables development teams to put car materials and components through some of the most strenuous climatic conditions.

The Proving Ground is made up of 120 km (75 miles) of paved and off-road routes, including a 10.3 km (6.4-mile) high-speed oval, gravel off-road tracks, high-vibration road surfaces, brake test facilities and different gradients. These each enable engineers to evaluate and refine the ride, handling, brakes and NVH of prototype and production vehicles.

The Mojave site also houses a material weathering facility, where full cars and a variety of parts are exposed for a full year to the continuous UV radiation from the California sun's intense rays. This exposure is accelerated through different testing equipment, ultimately ensuring that the various parts and components of Kia's vehicles do not deteriorate under extreme heat, and remain intact throughout the whole life of a vehicle.

Kia's most rigorous global testing programme yet
The fourth-generation Kia Sportage is almost at the end of a worldwide development programme, which has seen a fleet of development test vehicles subjected to numerous durability and reliability tests, equivalent to a cumulative mileage of more than 5.5 million kilometers – approximately 137 circulations of the Earth around the equator, and a far greater distance than many motorists will cover in a lifetime of driving.

Engineered to meet the needs of a global customer base, the Sportage has been subjected to high altitudes, sandstorms, monsoons, congested city centres, alpine passes, and extreme weather material testing covering temperatures as low as -35ºC (-31ºF) and as high as 110ºC (230ºF). Extensive testing carried out across the world's diverse roads will make the Sportage a truly global car when it goes on sale.

All Kia models undergo testing to ensure the highest possible durability in all conditions, with the all-new Sportage undertaking the company's most extensive – and intensive – testing programme to date.