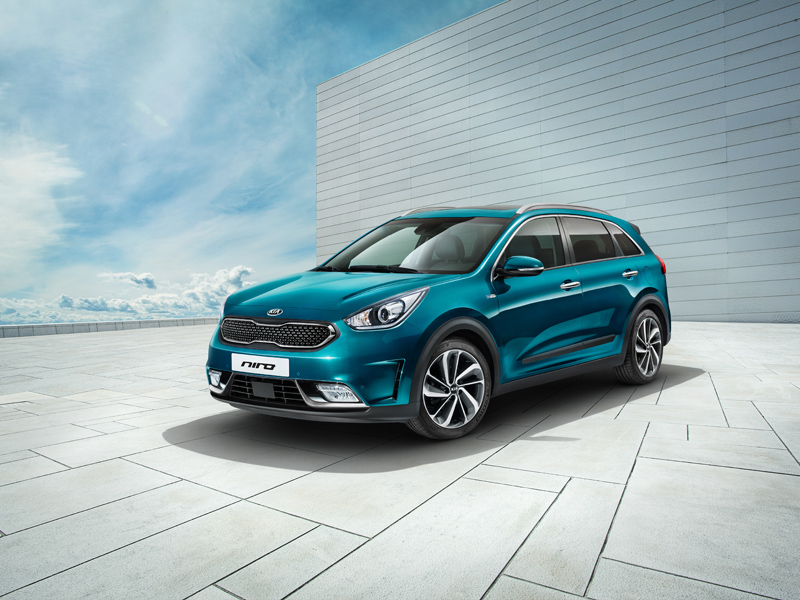 The new Kia Niro is proving an early sales success for Kia Motors, with more than 23,000 orders placed across Europe since the low-emissions hybrid crossover went on sale from the middle of this year.
Since the start of European sales in July up to the end of October, Kia has delivered 5,815 of the new Niro to customers. Orders have been placed for more than 15,000 additional vehicles, all due to be delivered to European buyers by the end of 2016.
The Kia Niro is the first of its kind – a car that combines the practicality and design appeal of a crossover with the high fuel efficiency of a hybrid. The parallel hybrid powertrain combines a 1.6-litre gasoline direct injection engine with lithium-ion polymer battery pack and 32 kW electric motor, transmitting power to the front wheels through a six-speed double-clutch transmission. The Niro is capable of producing carbon dioxide emissions of just 88 g/km and achieving fuel efficiency of 3.8 L/100km (combined, New European Driving Cycle).
Of the vehicles delivered to customers so far, 46% have been purchased by private buyers, with the remaining 54% sold to business and fleet buyers. Among Kia’s wider European model line-up, by comparison, 57% of all Kia models sold are bought by private customers, and 43% by fleet buyers. The Niro is an important car for Kia as the company seeks to expand into the fleet sector, with competitive running costs, low carbon dioxide emissions, and an attractive crossover design attracting many new business buyers to the Kia brand for the first time.
Michael Cole, Chief Operating Officer of Kia Motors Europe, commented: “The Niro is very well suited to both private and corporate buyers who want to keep running costs and carbon emissions low, but don’t want to sacrifice style and practicality in the way that might be necessary with other hybrid models. We are already seeing the Niro perform well in markets with emissions-focused taxation systems, as well as in others where there is a keen focus on the car’s all-round practicality and design.
“Kia is on course to achieve a three per cent market share in the medium term, and the Niro is set to play a leading role in this push. The Niro offers a compelling package and this early sales success proves there is room in the market for a new car that bridges the gap between crossovers and hybrids.”
Key features of the new Niro include a suite of DriVE WISE Advanced Driver Assistance Systems, including Autonomous Emergency Braking with pedestrian detection. Niro buyers can select from a wide range of connectivity features, such as Android Auto™ and Apple CarPlay™, as well as the brand’s own Kia Connected Services telematics system. A smartphone-friendly car, customers can also specify a wireless smartphone charger and an eight-speaker JBL Premium audio system. The hybrid crossover is also able to tow braked loads of up to 1,300 kg, a significant capability for a hybrid crossover.
The Niro’s six-speed double-clutch transmission gives the car a more direct and immediate response to driver inputs – and a more entertaining drive – than hybrid rivals fitted with a traditional electronic continuously-variable transmission. The car’s global development programme has seen the car tested in Europe, North America and the Far East, resulting in a smooth ride, engaging handling and high stability from its fully-independent suspension.
The Niro is sold as standard in Europe with Kia’s unique 7-Year, 150,000 km warranty – a duration of warranty unrivalled by any other producers of hybrid crossovers in Europe.