The Kia Stinger is Canada’s 2019 Car of the Year, according to the Automobile Journalists Association of Canada (AJAC) 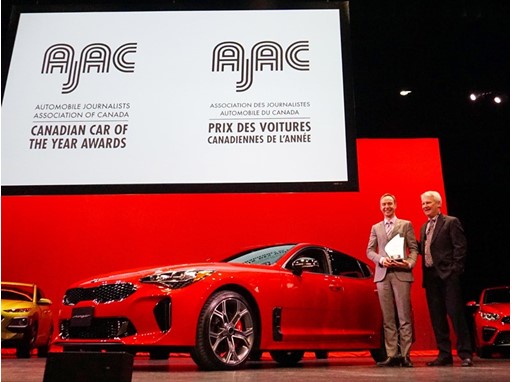 Today at the Canadian International Auto Show (CIAS) in Toronto, the Kia Stinger has been named AJAC's 2019 Canadian Car of the Year, after being named Best Large Car earlier this year. A grand touring sedan loaded with safety and convenience technologies, the Kia Stinger has found a special place in the heart and driveway of many Canadian drivers and is now even further recognized by many of Canada’s top automotive experts.
“Winning AJAC’s Car of the Year award for the Stinger is a great honour for everyone within the Kia family,” said Michael Kopke, Director of Marketing, Kia Canada. “As a young brand that has come a long way in 20 years here in Canada, we’re grateful to all of AJAC’s voting journalists for taking the time to review our vehicles and recognizing the quality that our brand has put so much focus on.”
For Kia, now celebrating its 20th year in Canada, this year’s AJAC awards demonstrate how far the brand has come in terms of quality, design and consumer-focused technologies and features.
"It's a great achievement for a vehicle to win one of AJAC's coveted Canadian Car of the Year awards, but it's exceptional for the same automaker to make two award-winning vehicles in the same year,” said Mark Richardson, President, Automobile Journalists Association of Canada. “Congratulations to Kia for the well-deserved success of the Stinger and Forte."
For Canadians that have not yet considered a Kia, the awards are another reason to look at the brand with the ‘Power to Surprise.’ Both vehicles will be on display at this year’s Canadian auto shows and are currently available in dealerships across the country.
More information on Canada’s Car of the Year, Canada’s Best Large Car and the entire Kia lineup can be found at Kia.ca.