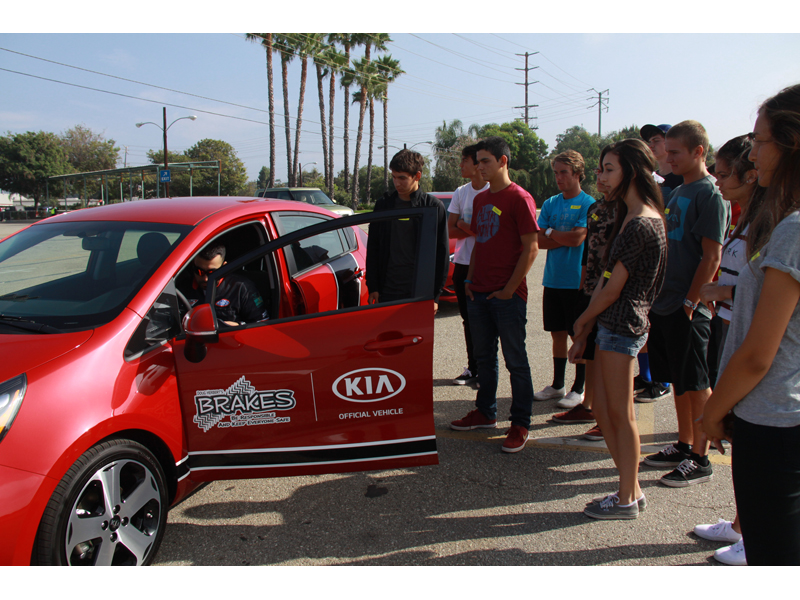 Motor vehicle crashes are the leading cause of death for 15-17 year olds [i], however, B.R.A.K.E.S. (Be Responsible and Keep Everyone Safe) and Kia Motors America (KMA) are working together to make the streets of the Twin Cities safer. The B.R.A.K.E.S. Teen Pro-Active Driving School will host the 501(c)(3) charity's free advanced driver training at the Manheim Auto Auction in Maple Grove, Minnesota. Registration for the lifesaving instruction is open now at PutOnTheBrakes.org/Schedule.

B.R.A.K.E.S.' highly skilled professional instructors will provide four hours of hands-on defensive driving education for nearly 150 teens in the greater Minneapolis area, adding to the more than 17,000 teens nationwide that have graduated from B.R.A.K.E.S.' intensive training course since 2012. Instruction includes a distracted driving exercise, emergency braking using the anti-lock braking system (ABS), evasive maneuvering and skid-control practice. Kia is the Official Vehicle and presenting sponsor of the B.R.A.K.E.S. Teen Pro-Active Driving School and provides a fleet of 32 new vehicles for the students and parents to drive during the training. With Kia's support, B.R.A.K.E.S. has been able to increase the number of schools offered and expand into new markets.

"Kia is committed to making our roads safer by providing teens and their parents with the tools they need to be better drivers and make good decisions behind the wheel," said Tim Chaney, vice president of marketing communications, KMA. "The B.R.A.K.E.S. training aims to reduce the number of teen accidents and thus save lives."

At any given daylight moment across America, approximately 660,000 drivers are using cell phones or manipulating electronic devices while driving, a number that has held steady since 2010 [ii]. A quarter of teens respond to at least one text message or have multi-message text conversations while driving.[iii] As a result, drivers under the age of 20 have the largest proportion of fatal accidents involving distracted driving[iv]. Accidents also remain the leading cause of death for teens globally. Working together, Kia and B.R.A.K.E.S. aim to change this statistic.

"B.R.A.K.E.S. is committed to helping teens prepare for the hazardous conditions they will encounter while on the road by teaching them to make safer decisions," said Doug Herbert, founder of B.R.A.K.E.S. and recent recipient of the Peter K. O'Rourke Special Achievement Award from the Governors Highway Safety Association (GHSA). "Kia's support of B.R.A.K.E.S. has helped us expand our reach, now including Minneapolis and later this month the greater Boston area. By working together, our goal is to continue reducing the number of teen deaths as a result of automobile accidents by providing teens the tools they need to develop responsible and safe driving habits."

B.R.A.K.E.S. has provided free safe-driving instruction for more than 17,000 students in 17 states across America. Each school offers nearly four hours of hands-on training with a low three-to-one student-to-teacher ratio to ensure personal attention, and parents participate in the courses alongside their teens to ensure proper driving techniques are reinforced following the session. Teens with parents who set driving rules and monitor their activities are half as likely to crash, 71 percent less likely to drive intoxicated, and 30 percent less likely to use a cell phone when driving and less inclined to speed [v].

· Accident Avoidance/Slalom: The two-part course simulates an animal or object jumping out in front of a car. It forces students to make a split-second reaction to help negotiate a quick, evasive lane change without losing control of the vehicle. Students must navigate their vehicle around cones while focusing on weight transfer, hand positioning and eye scanning.

· Distracted Driving: In 2009 it was estimated more than 5,400 people died in crashes that were reported to involve a distracted driver and about 448,000 people were injured [vi]. The course demonstrates the danger that cell phones, text messaging, and other distractions can pose while driving.

· Drop Wheel/Off Road Recovery: The drop-wheel recovery course teaches students how to effectively recover when one or more of their wheels veers off the road surface and onto the shoulder, regaining control of the car and safely returning to the roadway.

· Panic Stop: Teens often lack the experience needed to judge a safe following distance. The panic-stop course instructs students on proper braking techniques to help stop a vehicle in the shortest distance possible while maintaining control. Students experience firsthand the pulsating brake pedal effects of ABS and how to control the vehicle when ABS in engaged.

· Other learning experiences vary by school but can include an eye-opening view from the driver's seat of a big-rig truck with a discussion about safe zones and blind spots, as well as demonstrations from police and fire-rescue agencies.