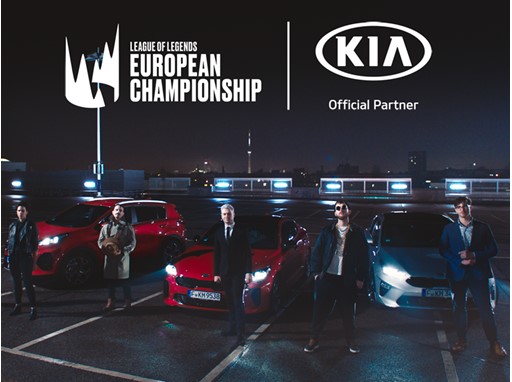 Kia Motors Corporation has today announced its first foray into esports – the arena of competitive video gaming – by becoming the main sponsor of the League of Legends European Championship (LEC).
Kia’s sponsorship of the LEC is the latest marketing campaign from a brand experienced in forging closer connections with younger generations of car buyers. As main sponsor of the championship, Kia has launched a new film called ‘Ready to Play’, created in collaboration with some of the LEC’s most well-known ‘casters’ (online gaming commentators). Kia’s film sees Trevor ‘Quickshot’ Henry gather a team of casters at the wheel of a new Kia Stinger, collecting Romain Bigeard, Indiana ‘Froskurinn’ Black, Daniel ‘Drakos’ Drakos, Aaron ‘Medic’ Chamberlain, and Andrew ‘Vedius’ Day on their way to the LEC.
Kia will create new digital marketing content throughout 2019 to grab fans’ attention, featuring prominent players,casters and Kia vehicles. Kia will also host promotional booths at LEC stadium events, and create original content with esports team ‘Fnatic’, who have won the League of Legends championships seven times, as they drive the latest Kia vehicles.
“Kia is already well-known for its sports sponsorships, and this partnership represents another marketing innovation from the brand. In parallel with our ties to more traditional sports this esports sponsorship will demonstrate how Kia supports the lives and lifestyles of a younger generation of digital natives. Our inaugural film, featuring some of the most well-known League of Legends casters, celebrates the start of a new and exciting era for Kia Motors and esports, and we are excited to become a main partner to the League of Legends European Championship in 2019,”said Yong Won Cho, CMO at Kia Motors.
"We are excited to partner with Kia and join a prestigious list of events and sports brands as we enter a new era for the League of Legends European Championship,
which is the leading esport league in Europe. We look forward to working together with Kia to provide an experience that money can't buy for all League of Legends players across Europe,” said  Alban Dechelotte, Head of Sponsorships and Business Development at Riot Games EU.
Launched in 2009, League of Legends is an online battle arena game and the world’s most popular esports game. League of Legends players control ‘champions’, and work together in teams as they clash for supremacy over in-game territory. The LEC represents the highest standard of League of Legends play in Europe, with ten teams competing in the top league. Like traditional sports, the LEC is watched by millions of engaged fans, following teams of professional esports players and high-profile casters via digital streaming services.
• Learn more about LEC at :
- https://www.youtube.com/lolesports (Youtube)
- https://www.instagram.com/lolesports (Instagram)
- https://www.facebook.com/lolesports (Facebook)
- https://twitter.com/lolesports (Twitter)
- https://www.lolesports.com (Official Website)