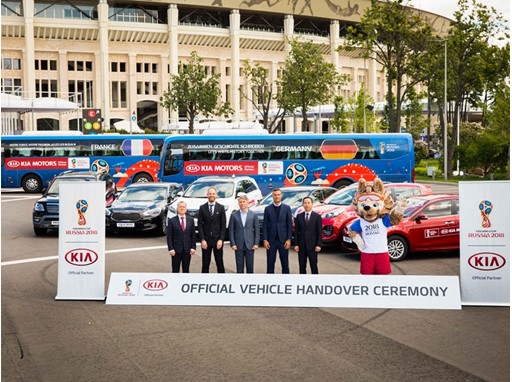 Kia Motors has supplied 424 vehicles to assist in the smooth running of 2018 the long-awaited FIFA World Cup Russia™. The provision of a Kia World Cup fleet demonstrates, once again, Kia’s ongoing support and passion for the world’s most popular football tournament. The vehicle handover ceremony took place on May 31 at the Luzhniki Stadium in Moscow – where the World Cup Final will be held on July 15.
The tournament starts on June 14. Airing to a global audience, the first fixture sees tournament hosts Russia take on Saudi Arabia. In total, 32 nations from around the globe will participate, hoping to claim glory at the most celebrated football competition in the world.
As an official partner to FIFA, Kia’s fleet of vehicles includes the K9 luxury sedan, Sorento SUV, Sportage compact SUV, and Ceed hatchback. Vehicles will transport national football teams, referees, officials and delegates during the 64-match tournament. The vehicle handover ceremony was attended by Jay Neuhaus, Head of Marketing Rights Delivery & Hospitality at FIFA, Eduardo Solis, Head of Partnerships and Promotions at FIFA,
Alexey Sorokin, Chairman & CEO, FIFA Local Organising Committee, and football legend Nemanja Vidic, former Manchester United, Spartak Moscow, and Serbian national team player.
“Kia Motors has been our Official Partner since 2007 and we are grateful for its support in supplying a quality fleet to assist with this year’s FIFA World Cup in Russia.” Jay Neuhaus, Head of Marketing Rights Delivery & Hospitality at FIFA said. “Kia Motors hold an important role in the operational success of our events. Their vehicles will ensure a smooth operation of the event, enabling us to transport players, media and officials throughout the tournament. Both FIFA and Kia Motors share a passion for football and we are ready to deliver the excitement of the beautiful game to fans around the globe.”
“The 2018 FIFA World Cup is just around the corner and it’s a really important global event for millions of football fans all over the world,” Jeong Won-jeong, President of Kia Motors Russia said. “We are excited to be involved in making the 2018 FIFA World Cup a success, and we look forward to bringing people closer to the Kia brand through this major event.”
Kia will offer football fans several opportunities to get involved in World Cup festivities under its ‘Get into the game’ participation campaign. To begin with, Kia will give a once-in-a-lifetime opportunity to 64 children across the world, inviting them to Russia as ‘Official Match Ball Carriers’ for each of the FIFA World Cup™ matches.
For those who wish to emulate their heroes, ‘Champ into the Arena’ offers amateur footballers around the world the opportunity to participate in a ‘five-a-side’ tournament in Moscow – where 16 nations will go head-to-head for international glory. All participants will be invited to watch a Round of 16 match, with the winning team receiving their trophy from one of the world's best footballers.
Finally, Kia’s ‘Lucky Drive to Russia’ lottery will give anyone visiting a Kia showroom in 30 different countries between now and the event the chance to enter a prize draw – with World Cup tickets awarded to the lucky winners.
More information on Kia’s ‘Get into the Game’ activities can be found at www.facebook.com/Kiamotorsworldwide