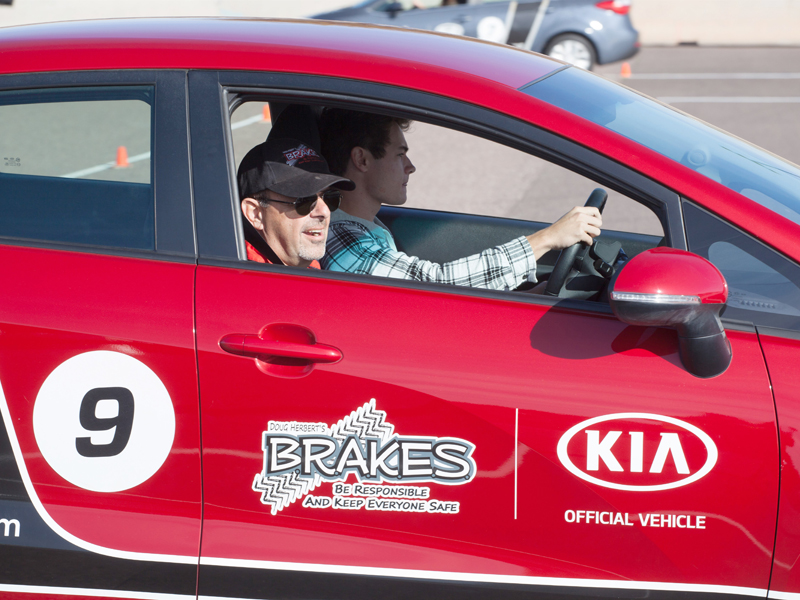 IRVINE, Calif., March 24, 2016 – To accelerate the education of teen drivers and their parents on safe driving practices, Kia Motors America (KMA)today announced an expanded partnership with B.R.A.K.E.S. (Be Responsible and Keep Everyone Safe), a non-profit organization that provides free, hands-on defensive driving workshops in cities nationwide. The multiyear partnership is expected to double the number of teens and parents that receive the life-saving training. B.R.A.K.E.S. will use an expanded fleet of vehicles provided by Kia and increase the number of classes offered.

Motor vehicle crashes are the leading cause of death among 15-17 year olds and the first six months of driving are the most dangerous. During the months of March and April, B.R.A.K.E.S. workshops will be held in various cities nationwide, including the San Francisco, Orlando and Seattle metropolitan areas and Southern California. Visit PutOnTheBrakes.org/Shop to view the full list of available locations and dates and register for a school.

Major studies have shown that parents play a strong role in influencing teen driver habits. Teens with parents who set driving rules and monitor their activities are half as likely to crash, 71 percent less likely to drive intoxicated, and 30 percent less likely to use a cell phone when driving and less inclined to speed. Despite these sobering statistics, only 25 percent of parents have had a serious talk with their teen about the key components of driving. B.R.A.K.E.S. directly addresses this issue. Parents participate in many of the same exercises to ensure proper driving techniques are reinforced following the session. According to a recent study, teens who complete the B.R.A.K.E.S. program are 64 percent less likely to be involved in an accident in their first three years of driving and 84 percent of all B.R.A.K.E.S. graduates since 2011 had no crashes.

· Per mile driven, teen drivers ages 16 to 19 are nearly three times more likely than drivers aged 20 and older to be in a fatal crash

· On average, eight teens lose their lives every day in vehicle crashes, or approximately 3,000 teens per year

o As a result, drivers under the age of 20 have the largest proportion of fatal accidents involving distracted driving

Nearly 20,000 teens nationwide have graduated from B.R.A.K.E.S.' intensive half-day training course since 2008. Instruction includes a distracted driving exercise, emergency braking using the anti-lock braking system (ABS), evasive maneuvering and skid-control practice. Kia is the Official Vehicle and presenting sponsor of the B.R.A.K.E.S. Teen Pro-Active Driving School and provides a fleet of 44 new vehicles for school use. With Kia's support, B.R.A.K.E.S. continues to increase the number of schools offered and expand into new markets.

B.R.A.K.E.S.' free safe-driving instruction provides a low three-to-one student-to-teacher ratio to ensure personal attention. The training provides teens the tools they need to respond to scenarios they may face while on the road.

"Kia's renewed commitment will help us substantially increase the number of teens and their parents that receive life-saving training," said Doug Herbert, founder of B.R.A.K.E.S. and recipient of the Peter K. O'Rourke Special Achievement Award from the Governors Highway Safety Association (GHSA). "We aim to reduce traffic accident fatalities by providing teens and their parents with the training they need to make better decisions behind the wheel."

· Accident Avoidance/Slalom: This forces students to make a split-second decision to execute a quick, evasive lane change when encountering an unexpected object without losing control of the vehicle. Students must navigate their vehicle around cones while focusing on weight transfer, hand positioning and eye scanning.

· Distracted Driving: The course demonstrates the danger that cell phones, text messaging, and other distractions can pose while driving.

· Drop Wheel/Off Road Recovery: The drop-wheel recovery course teaches students how to effectively recover when one or more of their wheels veers off the road surface and onto the shoulder, regaining control of the car and safely returning to the roadway.

· Panic Stop: The panic-stop course instructs students on proper braking techniques to help stop a vehicle in the shortest distance possible while maintaining control. Students and their parents experience firsthand the pulsating brake pedal effects of ABS and how to control the vehicle when ABS is engaged.

· Other learning experiences vary by school but can include an eye-opening view from the driver's seat of a big-rig truck with a discussion about safe zones and blind spots, as well as demonstrations from police and fire-rescue agencies.