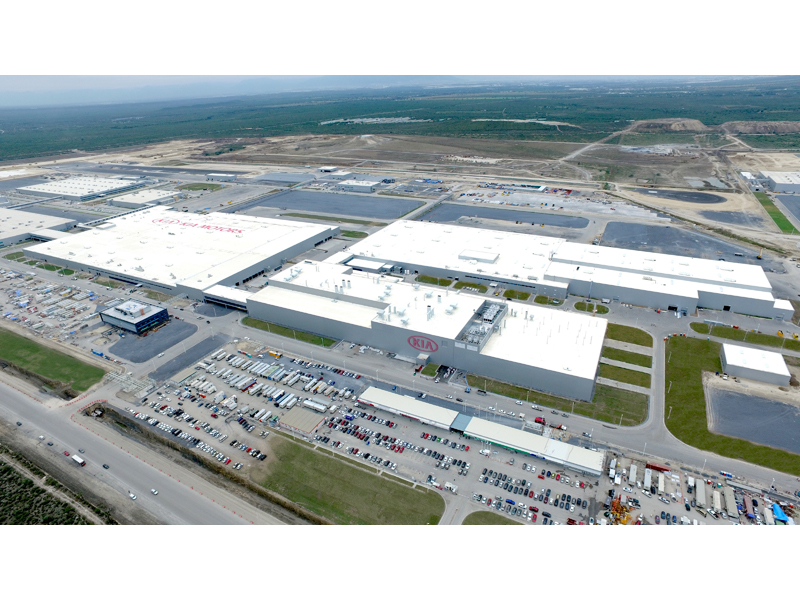 Kia Motors has announced the completion of construction on its first manufacturing plant in Latin America located in the municipality of Pesquería in the state of Nuevo León, Mexico.

With an initial investment of approximately US$3 billion into the project by Kia Motors and suppliers, the state-of-the-art Kia Motors Mexico plant was constructed in a mere 13 months after breaking ground on the site last October, representing the fastest construction completion of any manufacturing facility in Kia's history. Meanwhile, Kia Motors commenced full-fledged retail sales operations in Mexico this past July and has opened 46 dealerships across the country in the last five months.

Intensive quality assurance testing and pilot production will be conducted over the next six months with mass production of the Forte (also known as 'Cerato' in some markets) compact sedan scheduled to commence in mid-2016. The 300,000-unit annual capacity plant will represent approximately 10% of Kia Motors' total global manufacturing output.

Located on land spanning around 500 hectares, the plant is comprised of four main shops: stamping, body welding, paint and assembly. During the 13-month construction period, approximately 27,000 tons of steel were used and nine local Mexican companies worked together to build the structures of the four main buildings and framework for surrounding buildings.

"We are very proud of this great achievement, not only because we have built one of Kia's largest plants in the world, but also because we did it in record time," said Seong-Bae Kim, President of Kia Motors Mexico. "And thanks to the state-of-the-art technology and manufacturing processes being introduced to the plant, we expect our facility to be one of the most environmentally-friendly automotive manufacturing plants in the region," he added.

Kia's Mexico plant joins the 10 other manufacturing facilities in Korea, China, Slovakia, Russia and the USA where Kia vehicles are assembled. 60% of output from the plant will be exported to North America while 20% will supply the Mexican domestic market, and the remaining 20% will be exported to neighboring countries in Latin America.

Kia Motors together with its suppliers have hired around 4,000 Mexican employees, and over the longer term Kia's presence in Mexico is expected to generate approximately 14,000 direct jobs and 56,000 indirect jobs.

When designing the plant, architects were inspired by traditional Mexican culture and the main entrance bears striking similarities to the archaeological site of Teotihuacan, where the pyramids of the Sun and Moon serve as focal points for its dramatic layout. Meanwhile, basic silver gray and white panels were applied to the roof to reduce heat buildup typical of the hot climate in this region.

The manufacturing complex features sophisticated production equipment such as a US$75 million stamping press that measures 18 meters high and weighs 3,862 tons, making it the largest of any Kia plant in the world.

In line with Kia Motors' commitment to developing green production technologies to minimize its environmental impact in all of the regions in which it manufactures vehicles, the Kia Motors Mexico Plant utilizes an advanced monitoring system that promotes continual improvement in energy saving and environmental conservation. Furthermore, the plant boasts an integrated water treatment plant which will prevent soil contamination and harmful runoff into the nearby Pesquería River. The plant also uses LED lighting technology to save energy and is expected to introduce various projects to promote the use of alternative energy sources such as solar energy.

Mr. Kim added, "Once mass production commences, it will take less than one minute for a vehicle to come off the assembly line, making our facility among the most productive among all Kia plants globally."

"Today more than ever we feel very much a part of this wonderful country and want to convey that pride to all of the citizens of Mexico," he concluded.