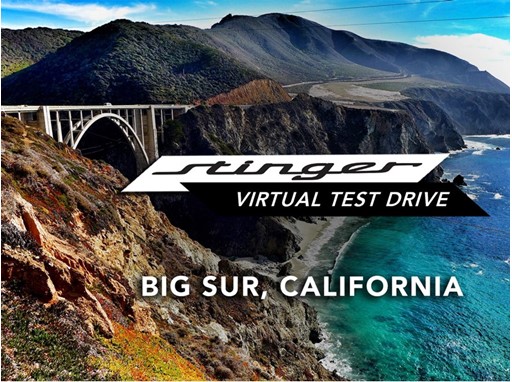 The 4D Stinger Experience Demonstrates the Power and Agility of Kia’s Highest Performing Production Vehicle Ever
As part of the ongoing marketing launch of the all-new 2018 Kia Stinger, next week Kia Motors America (KMA) will begin offering four-dimension virtual reality test drive at the North American International Auto Show (NAIAS) in Detroit. The immersive Kia 4D Stinger Experience virtually puts consumers behind the wheel and allows them to feel the speed, agility, responsiveness and handling of the highest-performance production model in Kia’s history through visual, audio and sensory cues. For those outside of Detroit, virtual test drives are now available at Kia.com and jauntvr.com as well as the Jaunt app, accessible on major VR and mobile platforms and downloadable to Android and iOS devices.
At NAIAS, participants will enter the Kia 4D Stinger Experience and, after a brief introduction which details the Stinger’s six-year journey from concept car to reality, travel through the provincial towns of Southern France, up and down the iconic Pacific Coast Highway along California’s Big Sur, and visit the Cadwell Park motor racing circuit in England.
“With a 0-60 time of 4.7 seconds and a top speed of 167 miles per hour, the Stinger is like nothing anyone has ever seen from Kia before and the 4D Stinger Experience takes virtual reality way beyond the visual to connect with consumers and enthusiasts at the visceral level,” said Saad Chehab, vice president, marketing communications, KMA.  “Every twist and turn, every rush of acceleration and every braking run is experienced as if you, the driver, are in command. Stinger is a vehicle that you need to feel to truly appreciate.”
During the four-dimensional virtual test drive, the voices of Kia representatives – including Kia’s president and chief design officer, Peter Schreyer, and president of vehicle test & high-performance development, Albert Biermann – emerge from the Stinger’s premium sound system and provide an overview of the test drive locations as well as the Stinger’s design, performance and high-end features.  Five projectors will display the immersive virtual test drive onto three projection screens and the specially programmed floor, with haptic feedback produced by a modified suspension rig that matches every twist and turn of the road, allows Stinger’s true gran turismo spirit to shine.  From a rapid ascent up the California coast to hairpin turns on mountain roads high above the South of France, Stinger’s sure-footed confidence and nimble ride and handling are on full display.