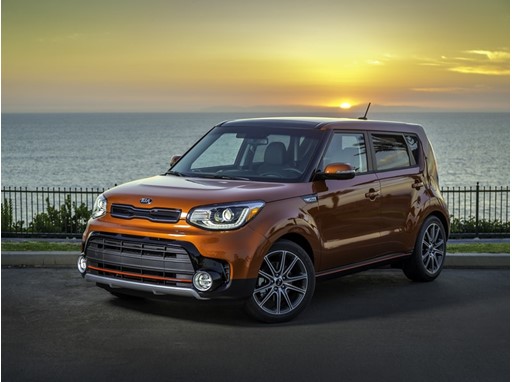 Urban Runabout Takes Top Honors in Subcompact SUV Category
Kia Motors America (KMA) is pleased to announce that Car and Driver has named the Soul to its 10Best Trucks and SUVs list, which recognizes 2017’s best trucks and SUVs on the market.  Thanks to its colorful personality, the Soul stood out among competitors in its segment, while its extensive list of features and excellent value further helped it land a spot on the esteemed list.
“We are honored that Car and Driver has named the Soul to its ‘10Best Trucks and SUVs’ list,” said Orth Hedrick, vice president, product planning KMA. “The Soul has been an extraordinary success story for the Kia brand, and earning this award is a testament to our continued commitment to world-class quality and top-notch design that can be – in the Soul’s case – as funky as it is functional.”
An expansion of the 10Best franchise, which has awarded the ten best cars on the market in each January issue for the past 35 years, the 10Best Trucks and SUVs awards are organized around segments and recognize one honoree from each category, including subcompact SUV, subcompact luxury SUV, compact SUV, compact luxury SUV, mid-size SUV, mid-size luxury SUV, large SUV, mid-size pickup, full-size pickup, and van.
Nominees consist of all-new or significantly updated vehicles. For the inaugural 10Best Trucks and SUVs awards, every nameplate—more than 150—was eligible. All vehicles must fall under the base-price cap of $80,000 and be on sale in January 2017.
“The current Soul has maintained the funky charm of the first-generation model with design—inside and out—that manages to be both fresh and genuinely attractive, attributes that are often at odds,” writes Car and Driver.
For 2017, the Soul gains a 201-hp 1.6-liter turbocharged engine for more fun than ever. Though the 1.6-liter turbo engine adds 40 horsepower, fuel economy is 28 miles-per-gallon, city and highway combined —slightly better than the combined mileage of the 2.0-liter normally-aspirated 161-hp engine in the Soul Plus and in the Soul Base 1.6-liter, which produces 130 horsepower. Performance in the turbocharged Exclaim is further enhanced by the addition of a new 7-speed Dual Clutch Transmission (DCT), which contributes to a more engaging driving experience. Other new options for the 2017 model year are convenience systems such as Rear Cross Traffic Alert and Blind Spot Detection. The 2017 Exclaim also gets standard UVO3 with e-Services with integrated Android Auto™ and Apple CarPlayTM.